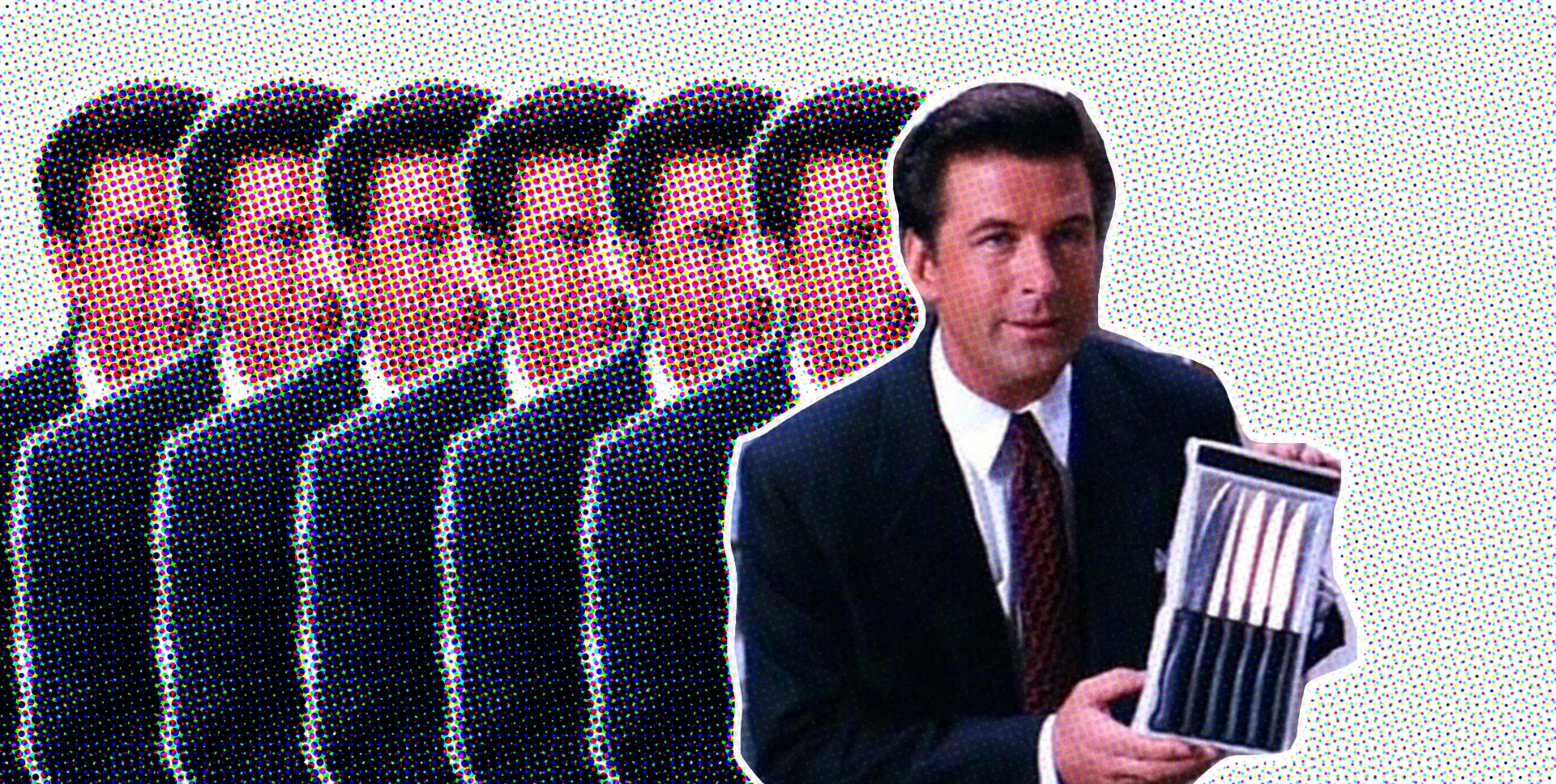 As Kairos' VP of Sales, I get asked all the time about the challenges of being a sales leader at a hot tech-startup. So here's some things I've learned about growing a team, getting customers, and selling face recognition software. TL;DR: It takes hard work and there's no secret formula. Now go win those steak knives!

A common misconception, and mistake, amongst early innovators was the idea that the more advanced the technology product, the more you can charge for it. As a consequence of this line of thought, tech innovation in the 90’s was so expensive that entire companies went bankrupt. In attempting to hit the moving target of customer demand before their time-- they effectively paved the road of entry for their replacements.

After the dot com bubble in the early 2000’s, companies who would become massively valuable (read: valued) were able to begin with no more than 2-3 engineers and limited resources, because the infrastructure had been established by the companies before them who invested heavily, then fell before the finish line.

Today, with the proliferation of blockchain and A.I., we’re experiencing a revival of that pre-dot com period wherein the organizations with the most resources are trying to invest in the next big thing, but will ultimately set the foundation from which massive companies and profits will be built in the future.

This trend certainly implies the possibility for early-stage A.I. companies to grow into self-sustaining behemoths-- but do they even want to? And if so, what does it take to do it? A brief look at the chart below (thanks, CB Insights!) clearly demonstrates that many A.I. startups are interested in exiting to larger tech giants, rather than seeking marketing independence-- and the first step to transitioning from ambitious startup, to tech giant rising from the ashes of innovators past is, establishing strategies that work toward building self sustaining revenue generation models. 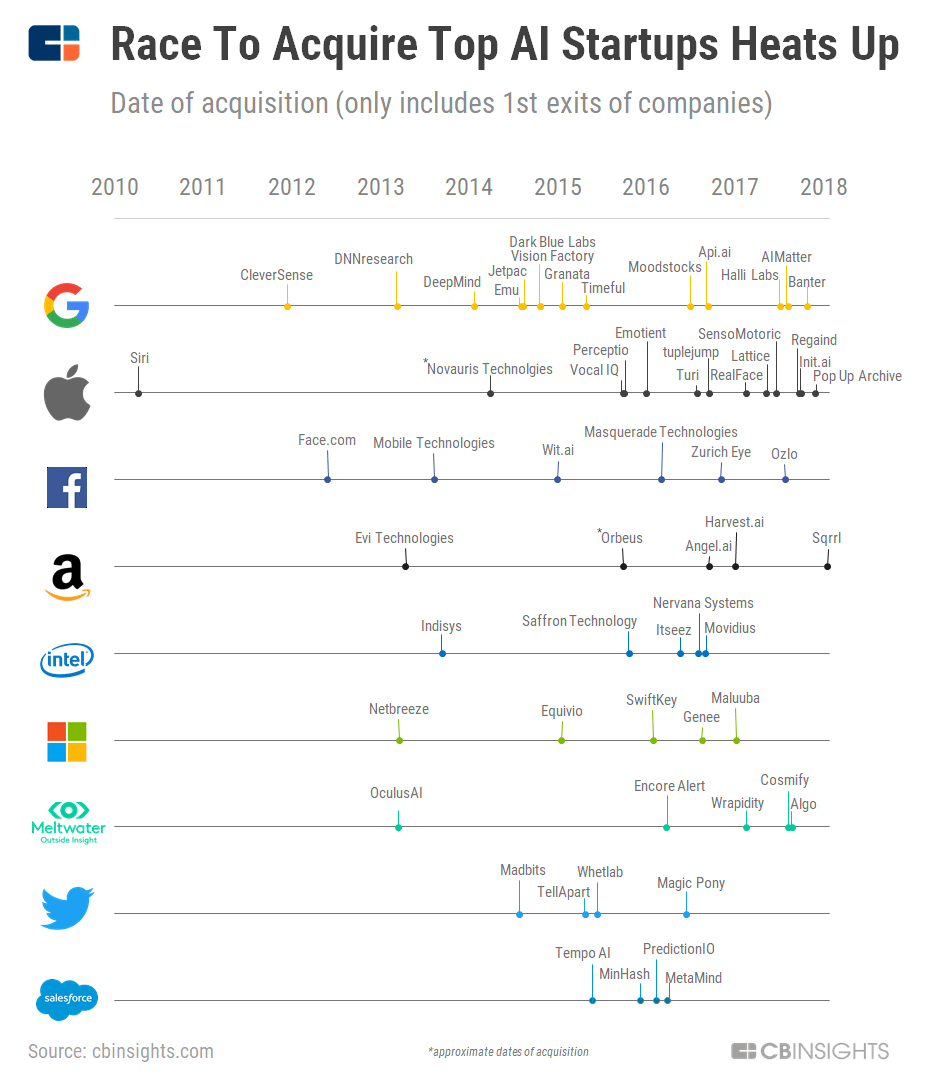 Inevitably, and perhaps ironically, taking the first step toward self sustaining revenue generation involves fund raising. Fortunately, in an investment economy including a thriving VC industry, increasingly popular ICOs, and a bull market-- acquiring capital is not the issue. Available funding options in combination with the overall attraction of advanced technologies and their cool buzz-words, ensure that the high-upfront cost to entry is likely not an insurmountable hurdle.

When you find yourself fully funded, consider co-founders and employees who believe in your company, see their engagement with you as an investment, and are willing to working in a startup environment. For example, top-notch Machine Learning Engineers can make upto $500K a year, which means your new company cannot afford them, which means (typically) the only way A.I. based startups can get going is by being founded by Machine Learning engineers who have a preference for risk rather than a cushy job at one of the tech giants.

Advanced-technology-for-profit organizations have an inherent disadvantage, as they're often founded by engineers/PHD’s with little exposure or understanding of market needs. More often than not, product ideas come from the founders studied areas of expertise, and not from an identified hole in the market. Understanding and respecting the vital role marketing plays in growth will make the difference.

There’s a reason Microsoft, Google, and IBM are the main players working in A.I. and blockchain. Revenue generated from simpler consumer applications allow higher and more sustainable investments in R&D. An early stage start-up on the other hand always risks running out of money, yet, this plays to the early-stage company's advantage. Large companies will always favor the status-quo, which is why they acquire small A.I. companies rather than releasing new products developed in their own R&D labs. Lack of money requires startups to solve actual problems quickly, as opposed to pouring cash into open-ended research.

"Candidates with 'at least 5 years of A.I.-Blockchain sales experience' simply do not exist"

- Yours truly, from the paragraph below

Unique to this moment and industry, candidates for soft skill positions, (sales, marketing, operations) are few and far between. In regards to sales, candidates with “at least 5 years of A.I.-Blockchain sales experience” simply do not exist. The lack of options leaves you with the choice of hiring candidates with a ton of sales experience in other industries, or newbies who are familiar with blockchain technology. More often than not, newbies are the best way to go. Unless the industry you’re targeting runs parallel to another and the potential sales rep’s book of business would be relevant, you will spend most of your time teaching an old dog new tricks. Seasoned sales people tend to only care about one thing, compensation.

Newbies, on the other hand, can be quickly molded to the specificity of your product/company, and are motivated to take ownership in a growing company as opposed to focusing on compensation alone. At Kairos, my initial hires were all recent graduates with previous, but relatively limited, sales experience. The investment in training these candidates is extensive but returns dividends. The biggest concern of an organization is finding candidates who are passionate, and can learn quickly.

A more nuanced issue in early-stage A.I. product sales is time wasters. As a pure Face Recognition company initially, we would receive inbound leads from:

Needless to say, our product was not able to accommodate any of these use cases, however, the sales team was able to quickly and ruthlessly flush out qualified leads. While the examples above may seem obvious, there were instances where it would take an average of five emails and two phone calls before we would determine if our solution was right for the client, which is a challenge many high-tech companies face.

A key to our success was reducing that number down to one email and one phone call. Allowing most leads to be qualified in one day versus one-week. We would ask oursleves:

We do these things, not because they are easy...

I believe building an advanced technology company from the ground-up, that’s here to stay is very possible-- and I’m here for it. Because for me, the potential reward is totally worth the risk.

But make no mistake-- it’s definitely the path of most resistance. 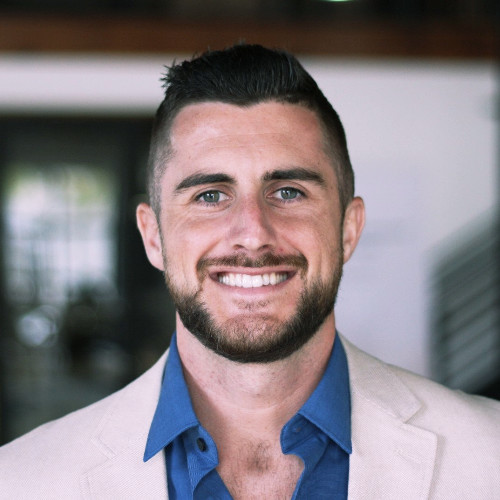