Kairos supports the standard cloud-init syntax and its own extended syntax to allow to configure a system declaratively with a cloud-config centric approach.

If you are not familiar with the concepts of cloud-init, official cloud-init is a recommended read.

Kairos is an Immutable OS and the only configuration that is persistent across reboots is the cloud-init configuration. Multiple cloud-init files can be present in the system and Kairos will read them and process them in sequence (lexicographic order) allowing to extend the configuration with additional pieces also after deployment, or to manage logical configuration pieces separately.

In Kairos the /oem directory keeps track of all the configuration of the system and stores the configuration files. Multiple files are allowed and they are all executed during the various system stages. /usr/local/cloud-config can be optionally used as well to store cloud config files in the persistent partition instead. /system/oem is instead reserved to default cloud-init files that are shipped by the base OS image.

By using the standard cloud-config syntax, a subset of the functionalities are available and the settings will be executed in the boot stage. 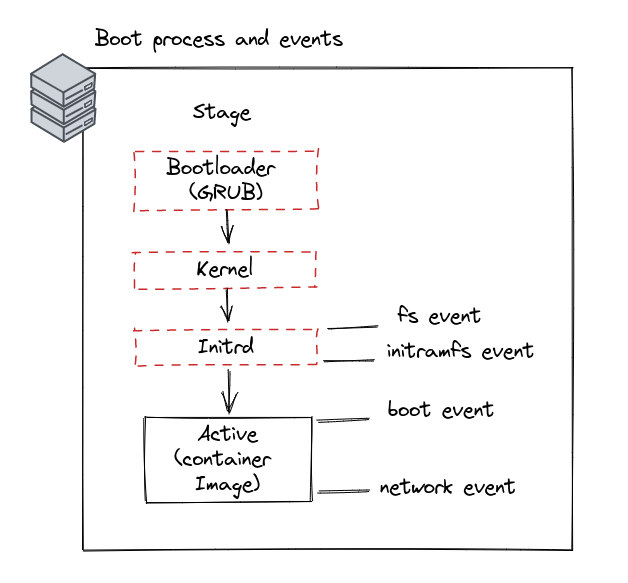 The events can be used in the cloud-config extended syntax to hook into the various stages, which can allow to hook inside the different stages of a node lifecycle.

For instance, to execute something before reset is sufficient to add the following to the config file used to bootstrap a node:

Below there is a detailed list of the stages available that can be used in the cloud-init configuration files:

Note: Steps executed at the chroot stage are running inside the new OS as chroot, allowing to write persisting changes to the image, for example by downloading and installing additional software.

When a Kairos boots it creates sentinel files in order to allow to execute cloud-init steps programmaticaly.

Was this page helpful?

Awesome! Glad to hear it! Please tell us how we can improve.

Oh snap! Sorry to hear that. Please tell us how we can improve.